Dogs, Science, and the Biology of Behavior

A conversation with Michael W. Fox 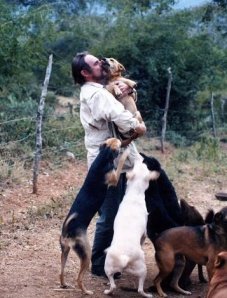 A love for animals

Michael W. Fox, who is not only a veterinarian with a PhD degree in medicine but also holds a Doctor of Science degree in ethology/animal behavior from the University of London, England, shows how science can enhance our empathy and ability to better care for and communicate with animals, and speak for the rights and interests of all creatures great and small.  An Honor Roll Member of the American Veterinary Medical Association and a founding member of the International Association for Applied Animal Ethology, Dr. Fox has helped make animal behavior and animal welfare science part of the veterinary teaching curriculum, and more generally awakening public sensibility through his internationally syndicated newspaper column Animal Doctor both in the U.S and in many other countries.  As an advocate of holistic and integrative veterinary medicine, and as a long term member of the American Holistic Veterinary Medical Association, he has promoted advances in organic agriculture, pet food nutritional quality, and is part of an international community of scientists, bioethicists and others opposing the incorporation of genetically engineered animals and crops into the human and animal food-chain by the non-sustainable industrial agricultural food and drug industrial complex.

Michael and I chatted for about 40 minutes, and it was such a moving conversation that I thought I would provide his voice to accompany his words in hopes they inspire you as they have me.

[Fox on the field of Ethology]

Fox:  You break down “Ethology” and it’s [two parts]: -ology is the study of, like “biology” or “cosmology”, and Eth-ology is the study of ethos, or the spirit that moves animals.  You are essentially studying the spirit that is motivating this being to behave, to respond, to interact.  I remember the conference in Rennes several years ago that was opened in the town hall by Konrad Lorenz—I mention it in one of my books at least—where he said to the gathering of these international ethologists, “before you are going to study an animal, you are going to have to first love it.”  I was standing with Daniel Lehrman and some of the other more mechanistic ethologists from the United States and they all started saying, “ohhh, he’s going soft” and “not being scientific”, but what Konrad was saying is that you have to have the connection—which I call empathy—before you can really begin to understand what’s going on.  And that was easy for him because he studied the Greylag geese and they imprinted onto him when he raised them as infants.  As fresh little hatchlings they thought he was their mother so they imprinted onto him and it was very easy.  But he did say that some animals can be very difficult to love, and he had one graduate student who was set studying some little aquatic creature who spent most of the day on the bottom of the aquarium tank and just came up for a gulp of air and then went down to the bottom and he said, “some animals are difficult to love but you have to hang in there.”

But I would say, getting on the practical level with dog trainers, broken down from the need to have an objective Skinnerian pigeon in the conditioning box to simply being with the animal is a big step for that individual to take.  And then you find yourself in the space with the animal and free from your own limiting conceptual space and that’s a real letting go, which is the antithesis of control and obedience training.  That letting go you enter another dimension really, of a deeper rapport and a communion where you are dealing not only with cognitive processes but emotional things going on too: such as fear, shyness, the need for attention, all those motivating factors that John Paul Scott and John Fuller, my mentors in Bar Harbor, looked at, and Daniel Freedman in his studies of different ways of raising different breeds of dogs, and genetics and emotions play a big role in trainability, but ultimately when you can break through the emotional and genetic related differences in temperament, dogs do turn out to be very similar in their basic intelligence (that was the conclusion of Scott and Fuller in their work).

[Fox on his early research in epigenetics and development]

Fox:  In my early research, I was interested in what is called “epigenetics” and my doctoral dissertation which was published by the University of Chicago Press, “Brain and Behavioral Development in the Dog”, I looked at other researchers who had been doing early handling studies on mice, Victor Denenberg and Gig Levine in particular, who found that if they gently handled the mice when they were pregnant, the offspring were more docile and more exploratory and they learned better because it affected their cognitive processes and emotionality and adrenal pituitary axis or whatever else was going on.  And so I applied these principles to some puppies that I raised and some that those that I had a programmed early life history of handling doing various things to them, including mild stress but lots of loving and cuddling, that they behaved in far more emotionally stable ways and were quicker learners than litter mates that were not handled the same way, and we applied that to the army’s German Shepherds that were being raised for combat work during the Vietnam war and we developed the Super Dog program based on that early research and these dogs performed incredibly better than dogs who hadn’t been in the program in field and they saved a lot of lives.

The reason I had the opportunity to speak with Michael is because he is speaking this summer at the first annual SPARCS International Conference on Dog Behavior in Redmond, WA.  Given the demand for Michael’s incredible knowledge and ideas, I had to ask him: why SPARCS?

[Fox about his speaking engagement at SPARCS]

Fox:  I think the opportunity to engage with the public, especially those who have dogs, especially those who are concerned about animals, and especially those who are in any professional realm as dog handlers, trainers and professional care givers including [veterinary technicians] and veterinarians, that I still think I have something to say that is old and eternally new: so far as socialization, stages of development, how early experiences can affect later behavior, the animal’s immune system and how modern interventions in the animals lives from vaccinations to using these various so-called flea and tick preventive drugs to manufactured foods (including GMOs) [that] are affecting dogs and cats, and my incredible information input that I get from my syndicated newspaper column of the kinds of behavioral and health problems that we’re seeing today, and how that spectrum has changed over the 30, 40 years that I’ve been writing this nationally syndicated column.  I have a lot of new stuff to share.

Michael will be presenting on all three days at SPARCS this summer, from June 28th-June 30th.  For more information on SPARCS you can visit CanineScience.info.  For research documentation and verification of the virtues of enlightened self-interest in humanity adopting Dr Albert Schweitzer’s advocacy of Reverence for all Life, visit Dr. Fox’s website www.drfoxvet.com and www.Facebook.com/DrFoxvet

One Comment to “A conversation with Michael W. Fox”